Helping Uganda Schools - HUGS - is an overhead free charity where all the money donated goes straight to our schools in Uganda. We do not employ anyone and we pay for all our visits to Uganda ourselves. In many ways this makes HUGS a unique charity. 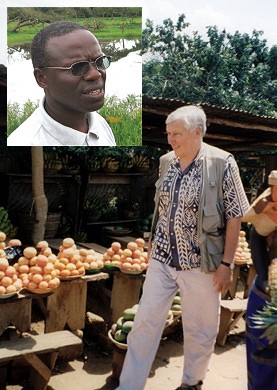 In 1995 John Kyazze (inset) was studying computer science at Manchester University. He met Peter Mount (right) and told Peter how difficult it was to provide education for children in his village in Uganda. Peter then asked a few friends if they would like to help and a number of people started to donate. This small amount of money went a long way in Uganda. The elders of the village then held a meeting and decided the best way to spend the money was to buy a small plot of land. Land was bought and the first school was built. The children who attend the school come from the nearby villages and some from many miles away. Children who travel a long way board at the school. All children are welcome. Five years later, in 2000 the charity was formed and we are known as HUGS, Helping Uganda Schools. This school has now educated over 1,500 children and a secondary school and Vocation Centre are currently being built. It is an ECO school and is leading the way in environmental sustainability.

HUGS has also helped other schools in Uganda that were struggling. However, our greatest challenge came in 2009 when HUGS built the first school in western Uganda for children with special needs. This school was the inspiration of Theresa Abigaba who was studying for an M.A. in special needs education. She met Peter Mount in Manchester and told him her dream was to build a school for children with Special Needs. She told Peter these children receive no education or training. HUGS decided this school should be built to a high specification and should lead the way in valuing children who have difficulties to overcome.