In the tall, green and wild rainforests of Africa, deep in the heart of the trees lived a little monkey named Asobora. The rainforest was Asobora’s home, where he lived with his Mummy and Daddy, and his brother and sister. Asobora was a very cheeky little monkey, who wanted to see the whole world. Asobora dreamed of climbing mountains, and swimming in the wide open seas, but he was far too young for that. 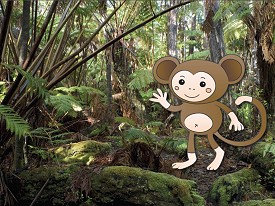 Asobora left the rainforest, running up the hills as fast as he could. He wanted to find out about this place, he wanted to make his dream of seeing the world a reality. He arrived at a place called Lake Bunyonyi. He dipped his toes into the water, never had Asobora seen anything so big and blue. 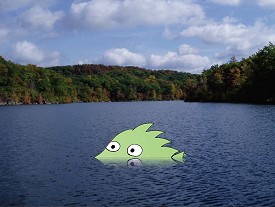 Asobora looked down, he saw a large, bumpy, green shape making its way through the water, heading closer and closer towards him. Two eyes popped up above the surface of the water, they started straight at Asobora. He wasn’t scared, even though he thought he probably should have been. Asobora smiled at the creature, still unsure what it was. The creature lifted its head, its huge mouth appeared, teeth as white as snow and as sharp as a razor.

‘Hello, my name is Buzobosi. What’s your name?’ Asked the creature. ‘Asobora’ the monkey replied, ‘I’m from the rainforest, over there!’ He said, pointing to his home in the distance.

‘This is my home, I live in the water here with my mummy and daddy’ said Buzobosi. Asobora stared at Buzobosi, he had never seen anything quite like him. ‘What are you?’ 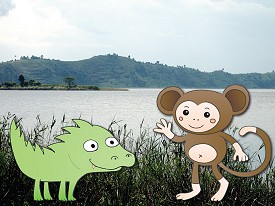 The monkey asked. ‘If I’m a monkey, then what are you? I’ve never seen one of you before!’

‘A crocodile’ answered Buzobosi. He stepped out of the water to show Asobora his full body; his long tail, and his short legs. ‘I’ll show you some other animals in Africa if you like? I bet you haven’t seen many living in the rainforest.’

‘Yes, please!’ An excited Asobora replied. Finally Asobora could see what he had been living so near for all of his life. ‘I’ve never had a friend that’s a monkey before’ Buzobosi told Asobora. 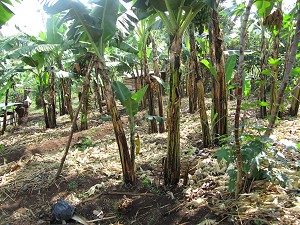 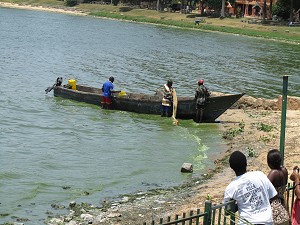