It was a very sunny day in Uganda today, and the three friends, Asobora the monkey, Buzobosi the crocodile and Magesi the elephant were swimming in Lake Kwania.

‘Splash, splash, splash!’ Asobora shouted, excitedly, and he slammed his hands onto the surface of the water, making it leap up and into Magesi’s face. Around and around he ran in the lake, splashing the water, giggling to himself.

‘Asobora!’ Magesi shouted, and all of a sudden, through his trunk, he squirted water all over the little monkeys head. With his sodden hair covering his face, Asobora started to remove the hair, first from over his left eye, and then from over his right, as he was overcome by a fit of giggles, shortly followed by Magesi and Buzobosi. 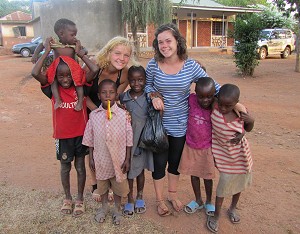 As they continued their games in the water, they spotted a little boy alone by the lake. Asobora crept up to the edge, as quietly as he could, trying to make the water stay as still and as possible. And then, as if from nowhere, he emerged from under the water, at the boy, and shouted ‘BOO!’

The boy did not giggle, as Asobora wanted him to though, and instead he cried, and held his knee. Asobora ran out of the water and over to the crying boy. ‘Have I made you sad?’ He said ‘I did not mean to make you sad; I only wanted to make you laugh. I'm sorry’.

Wiping the tears from his eyes and his tiny cheeks, the boy said ‘you have not made me sad little monkey, I have hurt my knee, and it is bleeding.’ He removed his hand from his knee and showed Asobora the cut. Asobora then whistled loudly, grabbing the attention of his two friends, and waved at them to come over to him and the little boy with the cut knee.

‘Oh no! What has happened here?’ Said Magesi. ‘That looks very sore, please, let me help.’ Magesi took the boys hand and gently poured some of the Lake Kwania’s water on to the boy’s knee. And, as if by magic, he saw the blood wash away from his knee. ‘All better now’ said Magesi. 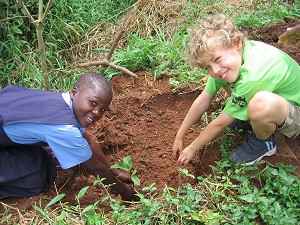 The boy’s frown instantly turned in to a smile, and he thanked Magesi by giving him a great big hug. ‘Show us how you new knee works then’ said Asobora, and with that the boy leapt up, right into the air, and began to run around, the edges of the lake. The animals followed him, all running after each other.

When everybody was tired, Asobora suggested they eat the fruit they had brought with them. As the three animals sat around, ready to eat, the little boy got up and began to walk away. ‘Would you not like any fruit?’ said Buzobosi. ‘There is plenty to go around.’ So the little boy turned back around, and shared the fruit with his new animal friends.