It was new day in the Rainforest where Asobora the monkey lived. ‘Another day, another adventure’ he said to himself as he leaped off the branch he used for a bed, in the tall, wondrous tree he and his family called home.

‘Go into Uganda, Asobora, and bring us something nice home to eat, something we cannot get here in the forest.’ Asked Asobora’s Mummy. Asobora loved to wander, and since he had found his way out of the forest, he had been desperate to go back to the new place he had discovered.

‘Okay mummy.’ He replied, and off he went. Traveling the only way he knew, swinging branch to branch, re-tracing the way he had gone the first time he left the forest. He saw it in the distance, the place that had become a familiar sight to Asobora, but was still just as exciting. Again, he was in Uganda. 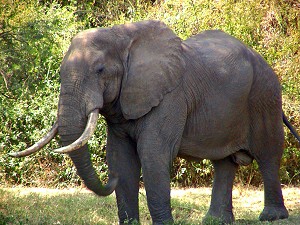 As soon as he reached the final branch, he took a huge swing and spun to the ground. He could not wait to see more of Uganda. Sprinting across the landscape, he made his way to Lake Bunyonyi, to find his new friend Buzobosi the crocodile.

‘Buzobosi! Buzobosi!’ Asobora shouted, hoping to see his friend come out of the water. He continued to shout, but Buzobosi never answered to Asobora’s calling. Finally, Asobora turned around, determined to still go out in to Uganda on his own, even though he was scared of getting lost without the company of his new friend.

Suddenly, a voice from behind him said, ‘Buzobosi isn’t here today, he’s gone to Lake Kwania with his Mummy and Daddy to see his Grandma. I’m Magesi, is there anything I can help you with?’

Asobora turned, and stood behind him was a large grey animal. He had four large legs, with very round, flat feet. He had big ears, much bigger than Asoboras. And a long trunk where Asobora thought his nose should be. He recognised what kind of animal he was, he had seen his kind of animal from the tree where he lived, Magesi was an elephant.

‘My mummy asked me to come and get some food, and I wanted to explore, do you like to explore?’ Asked Asobora. Magesi nodded his head, and smiled at Asobora. ‘I will explore with you if you like, I will take you to the market, there’s plenty of food for you there.’ Said Magesi.

‘Yes please!’ Exclaimed a very excited Asobora. ‘My name is Asobora.’ So the two of them set off into town. 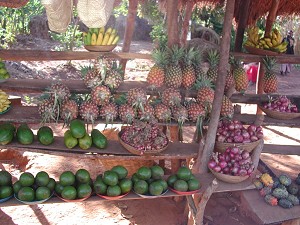 Along the way Asobora saw many things he had never seen. He saw buildings made of mud, with thatch roofs. He saw people coming in and out of these buildings, and children playing outside of them. ‘Those are people’s homes’ said Magesi. Interested, he watched Mummy’s and Daddy’s chopping up food, washing clothes, doing things his Mummy and Daddy did not need to do for him.

They finally arrived. The market was bursting at the seems with people, all searching for the best looking fruit and vegetables on offer. Asobora was in awe, surrounding him was more food than he had ever seen in one place, and in so many different colours. People were shouting ‘Fruit and Vegetables, home grown fruit and vegetables!’ And swapping money for bags of food.

Asobora and Magesi wandered. ‘Try some of this, it’s Jack Fruit, we love it here in Uganda!’ Magesi insisted. Asobora took a piece, smelling it he did not think it smelt very nice, but did not want to hurt Magesi’s feelings. So he took a large bite, and chewing very carefully, he savoured the surprising taste.

‘Just like pineapple!’ He exclaimed, and took another piece. ‘I want to take some of this home for Mummy and Daddy’ said Asobora. So Magesi reached up on to the tables laden with fruit, and pulled a full Jack Fruit for Asobora to take home. The local people were very friendly to Asobora, letting him try all kinds of fruits and vegetables as he walked around. 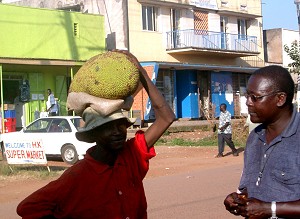 On the way home, Asobora was still amazed at what the day had brought him, and clutching his Jack Fruit, he turned to Magesi and said, ‘How does all of the food get in to one place, Magesi? When we have food in the forest, we have to search far and wide for different kinds of food.’

‘The local people grow the food as crops, either on the ground or in trees. Then, when it’s ripe, they pick it and take it to market to sell.’ Magesi answered. ‘In the forest, you have to get your own food, like we elephants have to get our own food, because all the creatures that live in the forest eat different things. It’s nature.’ He continued.

Asobora said good bye to Magesi as they reached his home near Lake Bunyonyi. Afterwards, he ran home, desperate to show his family what he had brought for them from the market. He clutched the Jack Fruit very tight so he did not drop it on the way home. Once he reached the forest, he used just one hand to swing from branch to branch, and used the other to hold the fruit.

‘Mummy, Daddy, look what I have!’ An excited Asobora exclaimed. His Mummy and Daddy climbed quickly down the tree, to see what the fuss was about, followed by his brother and sister. ‘This is a Jack Fruit, but don’t be put off by the smell, it’s delicious!’ as he handed pieces out to his family.

One by one, they all munched and crunched the Jack Fruit, taking in every drop of flavour. ‘Mmm’ said Asobora’s Daddy. ‘Where is this from Asobora?’ He asked.

‘The market Daddy! It had lots of things, small red things, and purple things, and orange things, so many things Daddy, food in all different shapes and sizes, and in every colour you could think of!’ And Asobora told his family about his day at the market, and his new friend Magesi. Afterwards, he was so tired out, he fell asleep right on the floor of the forest, so his Daddy had to carry him up the tree. He slept all night, and dreamt of the market, and could not wait to have another adventure in Uganda. 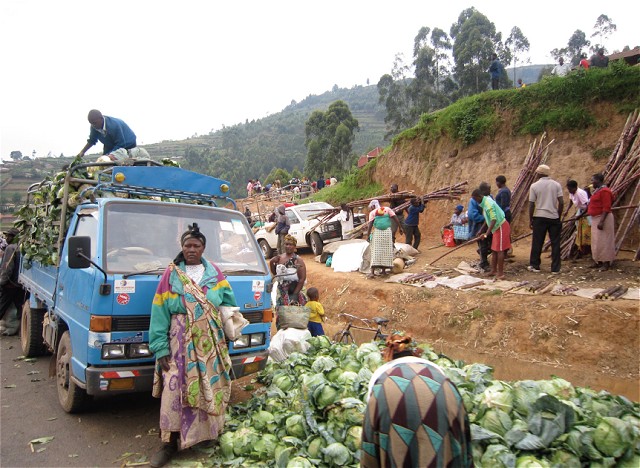