One morning, Asobora the monkey was woken by the brightly beaming sunlight travelling through the breaks in the forests leaves. It was the start of summer, and Asobora wanted to play with his friends. He jumped up out of his branch, and clambered down the tree where his family lived.

‘Can I go and play with Buzobosi and Magesi Daddy? Please!’ Shouted Asobora to his Daddy. He nodded, and off Asobora ran, dodging the tall trees as he went.

‘Buzobosi! Magesi! Buzobosi! Magesi!’ He chanted as he approached the end of the forest, in to mainland Uganda. ‘We're here Asobora!’ They shouted back from Lake Bunyonyi. The little monkey dashed across to his friends, panting as he ran, trying to catch his breath. Buzobosi the crocodile and Magesi the elephant greeted Asobora, and they tried to decide what today’s adventure should be.

‘Let’s play a game!’ Said Magesi, excitedly. Asobora did not know any games, and so they asked Buzobosi, who had a very thoughtful look in his big white eyes. 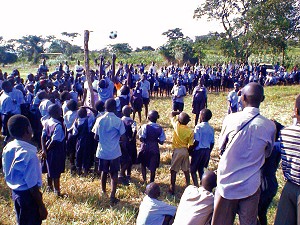 ‘I want to join in!’ Asobora said, as he walked over to the girls. They took his hand and he skipped around with them. ‘Ring-A-Ring-A-Roses…’ They began to sing, and Asobora quickly joined in. ‘We all fall DOWN!’ The girls shouted, and fell to the floor with laughter. Asobora enjoyed this game, and asked the girls if they knew any other games he and his friends could play.

‘We were going to play with skipping rope, you can play too if you like?‘ One of the school girls asked him. Asobora did not know how to play with skipping rope, he had only ever seen rope in the forest to tie trees together. They showed him what to do, and with his hands he gripped the rope, and swung it over his head, and then under his feet, jumping as he did it. He did it ten times without falling over. ‘I love to skip!’ He shouted.

After he had skipped for a while, Asobora decided he wanted to teach his friends how to do it. Magesi and Buzobosi were stood with their tails to Asobora, watching the other boys and girls playing. Asobora had a very cheeky idea. He crept over to his two friends, followed by three of the girls. Between them, they crossed the skipping rope in between Magesi’s legs, and then tied it to Buzobosi’s back legs and tail. They had to be very careful and very quiet, so the crocodile and the elephant did not notice what Asobora and the girls were up to.

They hurried back to where the other girls were playing, giggling as they ran. Asobora then shouted ‘Magesi! Buzobosi! Come over here and play!’ So the crocodile and the elephant turned around, and as Magesi began to walk, he found himself tumbling to the ground, tripping over Buzobosi’s long, lumpy tail. Roll, bump, crash the two animals went as they stumbled to the ground. Asobora turned to see the entangled animals and laughed, as did Magesi and Buzobosi.