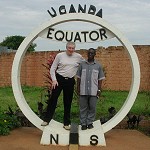 The aim of this project is to introduce the children of the UK to the landscape of another country and to appreciate similarities and differences.

Uganda is a beautiful, green and fertile country and is known as the PEARL OF AFRICA.

Uganda lies on the eastern side of the Continent of Africa. It is bordered by the countries of Kenya to the East, Sudan to the North, Tanzania to the South, Rwanda to the South west and the Democratic Republic of Congo to the West.

Uganda is a landlocked country and this makes it difficult for trading, importing and exporting goods. Everything has to be transported by road or across Lake Victoria.

Uganda is situated on the equator and has a tropical climate. The weather can be described as being like a beautiful summer’s day in the UK. The daily temperature varies between 20-27degrees. There are, however, two rainy seasons between February to May and between October and November. The northern part of Uganda has one rainy season from March to June and this presents challenges to the day to day lives of the Ugandan people. Lake Victoria is named after the former Queen of England and receives rain throughout the year. 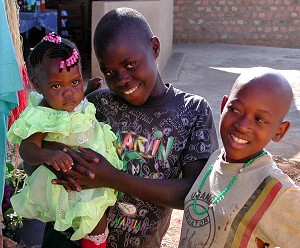 The landscape is mixed with lush, green and fertile land where crops are grown. These are cash crops such as coffee, cotton, tea, and palm oil. Food crops are grown that include, maize, millet, banana, sugar, cassava, potatoes both Irish and sweet potatoes and a variety of beans. The land in some parts can be dry and arid which makes farming and crop growing difficult.

The country also has Rain Forests and Jungle, the biggest being Mabira Forest on the way to Jinja. Jinja is the industrial town found in the Eastern part of Uganda. Jinja has beautiful views of Lake Victoria and is known as ‘the source of the Nile’ river, the longest river in Africa and in the world. Jinja also has the hydro-electrical dams that supply the power to all of Uganda and to neighbouring countries like Kenya and Tanzania.

There are two types of mountains in Uganda. Block mountains, including Mount Lwenzori, the longest mountain range found in the Western part of Uganda. The second are volcanic mountains. These include Mount Elgon in the Northeast, which are no longer very active. 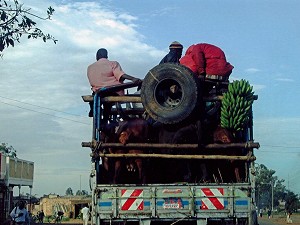 Mount Kilimanjaro in Kenya is the highest mountain in Africa.

There are many National Parks in Uganda, the biggest is the Queen Elizabeth National Park in western Uganda crossing into the Congo and there are others including Marchson falls national park, Lake Mburo national park and many more.

The population of Uganda is 33.8 million (census of 20/9/2010) of which 80 - 90 percent live rurally and live off the land. This is at a subsistence level where crops are grown and animals are reared on a small scale. The people belong to distinctive clans and there are 33 different languages spoken with the official language English, spoken as a second language. Luganda and KiSwahili are also used.

The capital of Uganda is Kampala where most banks, hospitals, courts and commerce are located. There is a free market economy and goods are exchanged in the market place. The currency is called the Uganda Shilling.

There is a lack of infrastructure in Uganda such as adequate roads, well equipped hospitals and sanitation. This presents many challenges in the day to day lives of the Ugandan people.

There is a variety of exotic wildlife in Uganda. Some examples are listed below -

The Grey Crested Crane is the Ugandan National Bird.

The interesting vegetation, landscape and exotic wildlife makes this part of Africa an exciting place to live.

This Gorilla - lives in the Mountains in Uganda. 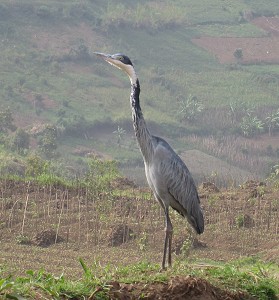 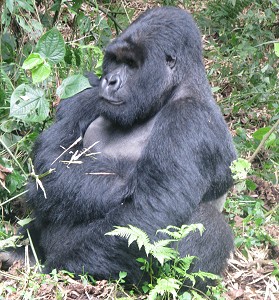