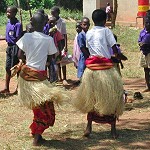 The aim of this project is to introduce the children in the UK to the culture and traditions of an African country Uganda. The culture of Uganda is colourful, interesting and diverse. It is based on the traditions of the country, which go back centuries and are bound up with religion and rituals. The traditions are handed down from generation to generation and each dance or song is imbued with meaning. Culture is important as it gives identity to a nation. It helps people to be true to their roots. 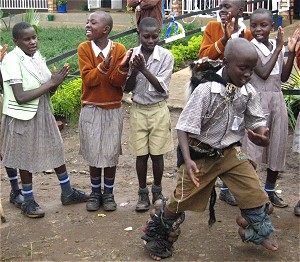 The children have music lessons and dance lessons, especially in preparation for particular functions, such as welcoming people. The children very much enjoy the Baganda dance known as the Kiganda dance. This involves singing, clapping hands, dancing to the cultural rhythm created by instruments such as drums and xylophones. The children put on a particular dress which demonstrates their culture. The traditional dancing originates from their ancestors who introduced and evolved these traditional dances to express their cultural tribal values. These traditional dances are also used by children to welcome people.

Songs are passed down through generations, from great grandparents and grandparents, to their children. The children then share these songs with their friends at school and hence the songs and culture are maintained from grass roots level.

The traditional songs tell lessons of how a child should behave and grow up and how parents should behave at home with family responsibilities. The children enjoy singing very much at home, school and in church. 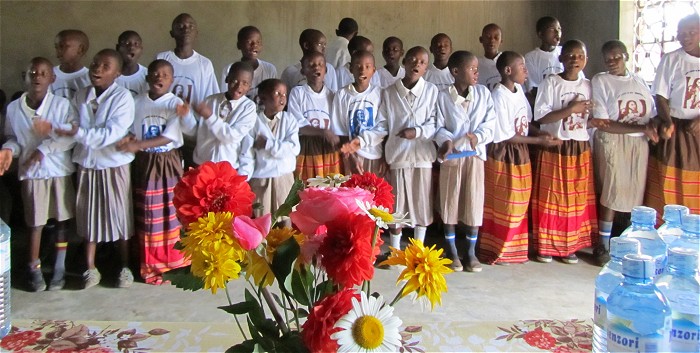 The instruments used in Ugandan music mainly include local drums such as Empunyi, Engalabi and Namunjolobe. Usually the traditional drums are made from Cow hide and wood. We also have an instrument that is strapped to the legs of boys; that contain lots of small shakers, the children then jump up and down with the beat and it adds to the rhythm and movement.

Traditional Ugandan clothings vary within each tribe; in the Baganda tribe, the women wear Gomesi. This is a long dress with a variety of bright colours, usually with a floral design and often including shiny material. The Gomesi has pointy shoulders and around their waist they wear a leesu, which is like a big scarf, made of heavy material and is usually gold or silver in colour (see picture of a function below). The wearing of a Gomesi demonstrates that you are a respectable lady and girls do not normally wear these in accordance with the culture. 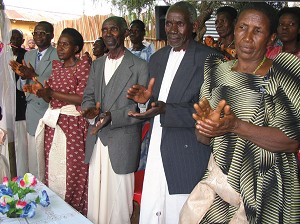 There are various accounts about the origins of the Gomesi, but most certainly it is an attire that is cherished because it promotes the value of decency in dressing among the ladies. Most certainly the idea for the design of the attire originated from tribesmen and early missionaries in Buganda and spilled over to other parts of the country.

Men wear a Kanzu, which is like a long white dress and has a pattern around the v-neck (see picture below). But normally, over the Kanzu is worn a coat (as in the picture above). This is usually only worn at ceremonies, whereas women wear a Gomesi when they go to church and meetings and to visitation days at school.

Generally in Uganda it is very rare to see a man wearing shorts, unless doing sports as that is a sign of someone being a young boy.

Uganda's cultures are rich in poetry and folklore. Parents and grandparents tell their children lots of stories, proverbs, tales and legends. These have traditionally been passed down from one generation to another. Through proverbs and riddles, the elders teach children moral values which help them to live good lives. At the same time, proverbs and stories provide entertainment.

those who walk together warn each other: your hair, bristling, gives you warning of the leopard.

That is to say: your hair always goes with you, and when the presence of a leopard is sensed, the fright makes your hair stand on end. This proverb teaches children the importance of mutual help of friends.