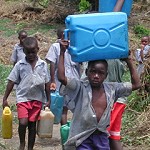 The aim of this project is to look at some of the health issues in Uganda.

UGANDA is a beautiful, green and fertile country. However, it is a developing country and this presents many challenges to the health of the population. Uganda lies alongside the equator and tropical infections such as Malaria are common.

In Uganda there is a mixture of healthcare provision. There are Public hospitals and charity hospitals. The latter are funded and managed by various churches and charities. Healthcare is underfunded and access to medical care patchy and unequally distributed. It is common for those requiring treatment to go untreated because they cannot afford to pay for the treatment. Antibiotics are expensive. Also, for those who live in the more rural areas it is difficult to walk to a medical centre to receive treatment.

In Uganda Herbal medicine is commonly used to treat illness. The general view taken is that if used correctly these can be helpful in treating a number of diseases. Herbal medicines are taken for coughs, stomach disorders and for immunity against Malaria. Like all medications they can have side effects.

Many of the diseases that have been eradicated in the West such as Polio, Tetanus, Diphtheria and Tuberculosis are still prevalent in Africa/Uganda. 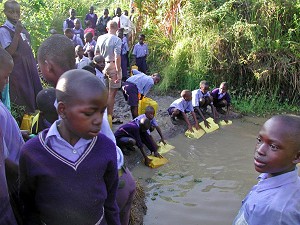 Swimming in many of the lakes is fraught with risks with the nasty Bilharzia disease prevalent. Also, a lack of footwear can lead to the children contracting Jiggers, which is caused by a worm burrowing into the feet.

The water for drinking is often collected from muddy ponds and this has to be boiled before it can be safely drunk. There are currently some programmes to provide water tanks for clean drinking water but money to secure clean water is not available to all and this leads to health problems.

Also, milk has to be boiled because of the risk of TB.

Tuberculosis is the world's most infectious killer of women of reproductive age and the leading cause of death among people with HIV/AIDS. Prevention relies on screening programmes and the BCG vaccine. Treatment is relatively inexpensive to cure but difficult access to healthcare, malnutrition, and no tracing services available of contacts to prevent the spread are some of the reasons it has not been eradicated.

Basic infrastructure that is taken for granted in the West such as sanitation, clean water, good roads and electricity are not available in many areas of Uganda. Poverty and poor diet are a factor in illness and there is little health education. 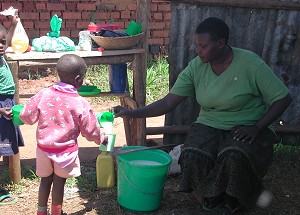 Families of 6 or more children is the norm in Uganda, with living conditions overcrowded and many children share the same bedroom making infections easier to spread from person to person.

There is a high rate of infant mortality before the age of one (65 deaths per 1000 live births). One of the major causes is the lack of insecticide treated mosquito nets to prevent Malaria. Usually people get malaria by being bitten by an infected female Mosquito. Malaria is widespread in tropical and subtropical regions of Africa. Malaria is commonly associated with poverty but is also a cause of poverty and a major hindrance to economic growth. Babies can also get diseases caused by severe malnutrition.

Also, cooking is done by fire in the open and this presents dangers to young children as a result there are numerous burns. 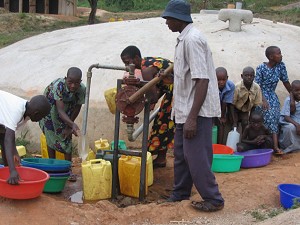 1) Improving sanitation
2) The use of treated mosquito nets
3) The use of vaccination and medication
4) Adequate and varied diet
5) Health and safety education
6) Addressing the infrastructure
7) Good maternity services
8) Outreach programmes to take healthcare to the rural areas.

HUGS is currently involved in a Malaria Prevention Programme and is aiming to provide insecticide treated mosquito nets to all the children at our schools.

In Uganda there are no taps to give running water so the people make a Tippy Tappy to use water from the river or water tank to wash their hands: 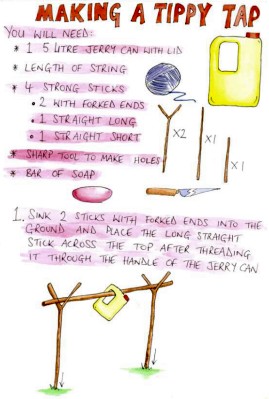 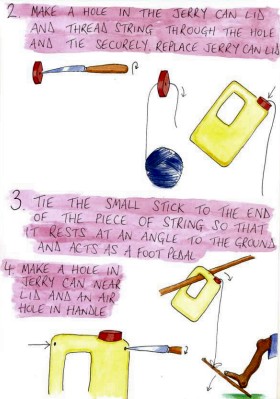 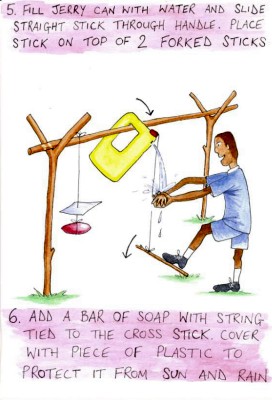