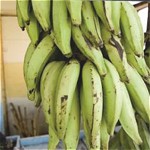 In this project we are looking at the schools we have built and the part played by the children in producing their own food, growing crops, farming fish and animal husbandry.

We will look at the staple diet and if the diet provides the vitamins required for children to grow and thrive.

In the UK we have become familiar with exotic fruits and vegetables that are transported from different continents and these have now become a part of our diet in the West. 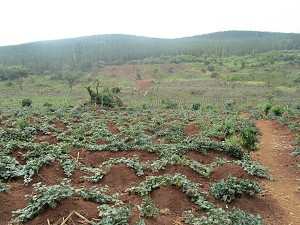 Plants and Foods in Uganda

The temperature in Uganda lends itself to producing a wide variety of crops and plants.

Farming in Uganda is mostly affected by the rainy and dry season patterns. The weather pattern is irregular and some people loose their crops from their gardens. Too much rain spoils beans but favours Bananas. While too much sun shine can dry up almost everything. Uganda is situated on the Equator, it receives a lot of sun shine and often this can spoil the crops.

The Land and Soil 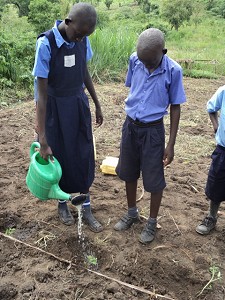 The soil type which we have is not evenly distributed across Uganda. In Eastern Ugandan we have some very fertile soil, due to volcanic activity in the past and also the rainfall within that area is also high. In Northern Uganda it is semi-arid and cattle keeping is the main income in this area, as the soil is quite baron and cannot be used for crops. In the central area due to the lake basin the soil is quite fertile. The south of Uganda also has plentiful rainfall and lower temperatures in comparison to the rest of Uganda; this region is able to grow apples and pears. Western Uganda is mainly cattle keepers and they utilise the cow manure to add
fertility to their soil.

Our Ancestors and the land

Some history from our Ancestors about working the land. 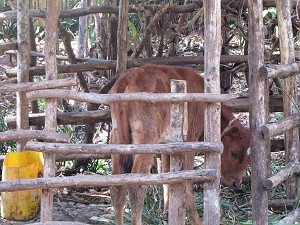 Some parents buy land as property to offer to their children as part of their inheritance.

The importance of cattle

What is exported from Uganda?

Western Uganda exports tea, as they have the correct climate for growing tea due to the Ruwenzori mountains. We export coffee, cocoa, fruit and vegetables.

What is grown in Uganda? 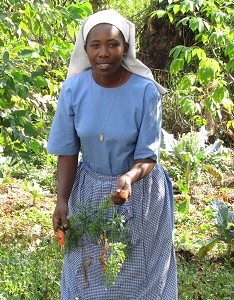 In Uganda we grow both food crops and cash crops like tea, coffee and cotton and on the same piece of land by using partitioning. We also grown medicine plants like Moringa and Alveolar. Other medicine plants grow like weeds and can be picked and used as medicines, such a plant is called Coutchgrass. Some specific leaves of trees are used like Mango trees to cure a cough. Others are mixed with cold water for bathing and used if a child or adult has a high temperature.

In Uganda the use of purified herbal medicine is on the increase and hence the rise in the quantity grown.

HUGS is always looking at ways to improve the lives of children in Uganda and we realised that the young children did not receive sufficient protein for their developing bones to grow strong. The children had porridge made with water and to improve their diet milk was provided by the charity and the children enjoyed the porridge made with milk. The development from this was St. Zoe's and the Good Shepherd now both have cows, goats, chickens and pigs and the Good Sheperd is also involved in fish farming.

This teaches the children more about animal husbandry. Also, the food produced goes towards feeding the children.

(All the milk produced has to be boiled before consumed otherwise the children are at risk of becoming ill).

The Fish we produce 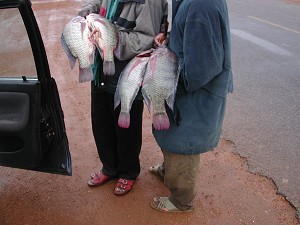 In Uganda there is a fish called Talapia and these are plentiful in the various Lakes particularly Lake Victoria. When you visit Uganda you see the men standing on the side of the road with the Talapia fish tied to a wooden stick ready to sell to passers by.

Talapia Fish are fresh water fish and in Uganda they have numerous ways to cook them. One of the ways is to boil the fish and then deep fry and serve with chips and vegetables. 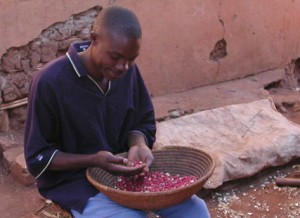 There are many examples of food eaten in Uganda, among which we have the following:

How some crops are grown 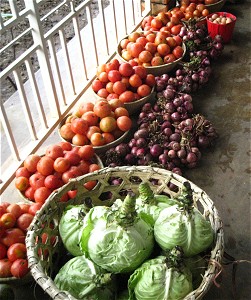 Cassava is grown by using stem cutting .The maturity period of the plant is around 9 months. The part eaten is the root tuber, however some tribes eat the leaves also.

Rice is grown by planting seeds, either by broadcasting or by making rows. The same thing applies to millet. The part eaten are the seeds and they take a period of 4-6 months to mature.

Sweet potatoes are grown by planting vines on a heap of soil made using a hand hoe. They also take 4-6 months to mature. The stem tubers are eaten.

For yams we plant the stem tuber and the root tuber are eaten. They take a period of 4-6 months to mature.

For Potatoes (locally known as Irish potatoes) we plant the stem tuber and eat the tubers; they take 3 months to mature.

We get posho from the maize corn; maize is grown by planting seeds and takes 4-6 months to mature depending on the variety. Posho is the main food fed to children in schools across Uganda along with beans.

For bananas, we plant suckers. They take around 12 months to produce a fruit, which is eaten when it matures.

Beans (kidney beans), we plant the seeds and they take 3 months to mature; the seeds are eaten.

Most of the fruits in Uganda take a period of 4-6 years to bare fruits. Their maturity period is relatively long in comparison to the other food we eat. Pawpaws, grapes and pineapples take 18-24 months to mature. Uganda has got good soil and climate to support all of these crops.

Where we buy or exchange foods (going to the market)

On the other side in the urban areas of Uganda, people buy food from the markets. In these markets all the food mentioned above are sold. Most of the food in Uganda is grown locally from the gardens of each household. Most people own gardens which are able to support their families. The food is mostly grown on a small scale by individual peasants in rural areas where there is some land and farm work can be carried out. If there is surplus food then the rural farmers take it to market in towns there are lots of food markets where peasants bring in their produce to sell.

People going to the market use different means of transport to get there; these include cars, bicycles, boda bodas and moving by foot. Each person buys what he/she wants according to their budget (financial status). 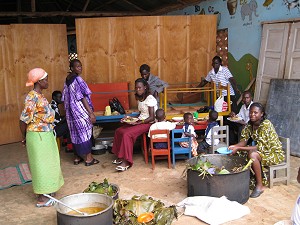 All the children enjoy meat, Irish potatoes and rice. All school children in Uganda eat posho and beans for lunch and often supper, so they appreciate any change and enjoy the occasional chicken. Proteins such as meat however, is a rarity for Ugandan children as meat is expensive and the children obtain most of the protein from the beans they eat.

Cooking in the open and our school lunch

Nearly all families cook in the open or in a small kitchen separated from the sleeping area, that is also used to keep firewood and as a foodstore. Lots of rural Ugandans use firewood. The school lunches are provided in huge cauldron like pots and the maize flour and water is stirred with a wooden oar which is exactly like a canoe oar, to make posho. The children eat their meals outdoors sat on the floor.

Bananas are an important food in Uganda and form the basis of Matooke - cook bananas served with a peanut sauce.