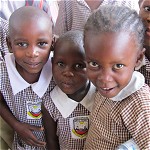 After dressing for school the children line up for a general assembly at 6:30am to check up for cleanliness, those dressed inappropriately for school are advised to go back to their matrons and dress properly. Children then go for Breakfast, which is porridge (maize flour and water boiled), this is for boarders only and is served at 6:45-7:00am. During this period day scholars also begin to arrive. From there children prepare for lessons which usually start at 7:30am.

At 10:30 -11:00am all students and staff take break, which is porridge. From 11:00am until 1:00pm children have lessons. From 1:00pm until 2:00pm children have their lunch which is usually Posho and beans. From lunch children go for lessons until 5:00pm. On Tuesday from 3:20-5:00pm it is games time. Games played include: football, netball, basketball, volleyball, athletics and bicycle riding. On Thursday from 3:20-5:00pm it is time for societies, where activities like debates, quizzed, music, dance and drama are carried out.

From 5:00pm-6:00pm minor activities like washing clothes and bathing are done. Then supper is served to all boarders at 6:00pm-7:00pm. By this time day scholars have gone home. 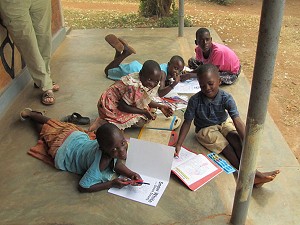 From 7:30-9:00pm remedial lessons are conducted under the supervision of teachers, according to the timetable. These lessons are for Primary 3-7. After these lessons, students go to bed at 9:00pm.

On Saturdays children wash their uniform under the help of their matrons and the teachers on duty. At around 10:00am the children take break and then go to classes for revision work, until 1:00pm. They also have games from 3:00pm-5:00pm.

On Sundays all children go for a general mass which is usually conducted by a priest from our local parish. This mass runs from 8:00am-9:00am. Breakfast is served after the mass. At 11:00am-12:00pm other religions such as Muslims also get special teachings from their Muslim preacher. Lunch is served at 1:00pm. There after children rest and general cleaning is done from 3:00pm-4:00pm. At St Zoe children also get entertainment over the weekends; usually they watch movies on the television set. We also watch movies for opportunity education, which involves different teachings.

The school day for a child who commutes is of a different nature. This child wakes up sometimes earlier than 6.00 am and begins with the house chores. She sweeps the house and the compound; sometimes goes to fetch water which will be used in the home for the day. She also does the washing up if supper was served late and they could not do the washing up given that it is always dark in the night and there is no electricity.

It is after this that she washes, takes breakfast and runs to school. Depending on the distance, this child sometimes arrives late and misses out on the initial parts of the lesson. You can imagine how tired this child is by the time she arrives at school! 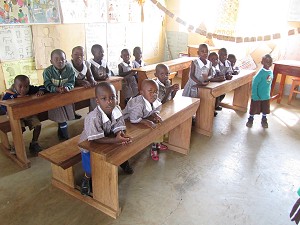 In the same way, she goes back home after 4.00pm and arrives late still to find house chores. Sometimes she is the one to bring back home the animals e.g. goats from grazing. She also helps the mother with the cooking, caring for the younger children, and other duties.

By the time the sun goes down, she is worn out. It is difficult for such children to do homework because of fatigue and lack of electricity.

Despite all this, the weekend for the child coming from the village is rather joyful. This is the time to do some playing after the day's work. Unlike the children in the boarding school, children who commute get more time with nature. They gather and eat fruits at their leisure, live close to their parents and siblings, which helps them avoid stress.